Sunday Firesides: The False Power of the High Chair Tyrant 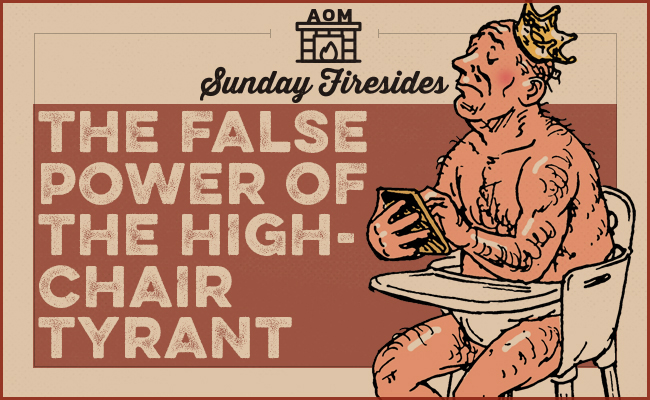 Robert Moore and Douglas Gillette coined the phrase “High Chair Tyrant” to describe a psychological “shadow,” an immature energy that could prevent a man from developing into mature masculinity and embodying its healthy “King” archetype.

Petulant, entitled, and demanding, the High Chair Tyrant feels himself to be the center of the universe and holds unreasonable expectations for how the world, and everyone in it, should cater to his needs.

The rise of the digital age has made the shadow of the High Chair Tyrant far easier to fall into than ever before. With a smartphone as his scepter, every man rules over his own royal fiefdom. At the touch of a button, he can summon food to his door, scroll through hundreds of potential consorts on dating sites, and order jesters to entertain him, in the form of blogs, videos, and social media. If anything displeases this would-be monarch, it is immediately removed from his court with a swipe of the finger.

Given how readily and instantaneously most everything conforms to his desires, the expectations of the modern High Chair Tyrant swell to grandiose proportions, both online and off. If any form of media doesn’t 100% align with his tastes and opinions, he is deeply and noisily disappointed. “Off with their heads!” Someone or something bores or offends him? “Guards, take them away!”

Yet what feels like real sovereignty, is only a neutered imitation of it. Waiting for someone to bring you good things is not the same as making them happen. Choosing from a menu of preselected options, is not the same as creating new ones. Consuming and complaining are the false powers of the weak and dependent.

A high chair is not a throne. You may feel almighty sitting in the former, but the reality is, you cannot get out of your seat.

The post Sunday Firesides: The False Power of the High Chair Tyrant appeared first on The Art of Manliness.

How To Design The Perfect Icon For Your Mobile App

Poker and the Benefits of Brain Exercise

Ask the Readers: What Are Your Favorite Biographies?